Hello, how are you? So it’s almost a new year already. I hope you are healthy.

I’m currently busy working, and I am also learning IELTS. I will have an IELTS test at the end of January 2021. Wish me luck.

And aside from that, I’m currently learning another language, which is Korean. Again, wish me luck!

“Why are you learning languages?”

For IELTS, it’s for professional and academic purpose. I can’t tell you the detail. Just wish me luck🥰

And for Korean, honestly, I’ve been wanted to master another language. I was confused between learning Chinese, Japanese and Korean. After a long process of thinking, I chose Korean.

Why? I’ve been obsessed with Korean Entertainment for more than ten years ago, and I often watch k-drama, and k-variety and listen to k-pop. So I think it will be easier for me to learn it. My dream is to watch k-entertainment without a subtitle.🥰

Deep inside, I’ve wanted to master at least four languages. I know it’s an ambitious goal; call it impossible even. Do you know the king of Turkey, Mehmed II, were fluent in 7 languages? It’s funny that I’m comparing myself to him. But it means it’s possible to learn four languages when there’s someone out there who fluent in 7.

These days, in my opinion, it’s common for people to be bilinguals. That’s why I am eager to learn more. And I also heard the more you know languages, the better you are in thinking.

“What person do you want to be?”

The answer depends on which phase of life I live in. I realized as time went by, I’d give a different explanation for several questions, including this one. It doesn’t mean that I’m capricious, but based on my experience, as I grew older, I become more aware of my weaknesses which makes me inadvertently minimize it.

Sometimes my goals, which also relate to what kind of person I want to be, directs to that direction, a direction where I can be a better human.

I try to be selfless as much as I can. But I don’t want to be that selfless person who in the end, will blame everyone because everyone depends on her/him. So that’s why I told you I want to be the lights for others but without “feeling too responsible” for other people.

I want myself to know that people’s happiness is not my responsibility, but it’s theirs. But at the same time, I want to make a better world for them, so It will feel more comfortable for them to live.

I’m quite religious, in my religion, we have this kind of mindset where everything comes from God, and God knows the best. That mindset makes me not be disappointed nor anxious if a person doesn’t do nor feel as I expected.

It’s hard, in need process and you have to be sensitive but also logical. So you won’t make yourself burned out.

“What do you mean by lights? Elaborate please”

These days, I feel people are hopeless about their life. Moreover, this year is one of the most challenging time for most people. The pandemic has caused us miserable, some of us lose our jobs, some of us lose a member of the family, some of us are depressed because we can’t see each other, the list goes on.

On March, I was visiting my uncle’s house in Jakarta. Families were gathering there, and suddenly one of the uncles that was also visiting the place I visited got a heart attack and passed away. I was just having a conversation with him about 2 hours before he passed away, he mistakenly entered the room where I slept.

On September, my dear brother passed away because of a motorcycle accident. Having two losses in a year, sudden ones, I’m not going to lie, It’s somewhat traumatic for me.

This year I also experience many rejections before I got my current job. Yeah, but that’s just life. I think I’m going to make a different post regarding this job-thingy.

I’m fortunate I survived, at least to this day when I’m writing this.

I cried, but the next day I grew stronger. I realized I’m still lucky I have my parents, my family, good friends, food to eat, and a roof to live. I realized losses, rejections, and failures are part of life, just like births, acceptances and successes. I’ve accepted that, and I know I can do what I can do more tomorrow, and that’s all that matter.

Some people don’t realize nor aware of that yet, which makes them can’t accept any of the bad things that happen to them. I don’t want to call them ungrateful or anything. Sometimes I know it’s hard to see good things in your worst. That’s why I always pray to God, show me your lights. I’m still afraid and anxious if in the future I can’t see it.

So this is what I mean, by lights I mean I want to help those who can’t see that they are loved, and I want to show them that there is still hope for the future.

I’ve witnessed people sadness too much. It’s enough. Everyone deserves to be happy.

This conversation makes me laugh. I love the duality of myself, where I can be both hopeful and sceptical.

The sceptic’s side of me used the be the one that dominated.

I gave a lot of thoughts regarding this. In the end, I think the most sceptical even choose to live because they feel or expects hope. They unconsciously wish something good in the future, even to the smallest.

That’s why I choose to be hopeful. Being hopeful is inevitable, but still, you need plan and action. If things are not working out as you expected, then you need faith. It’s a cycle.

“What is the best advice that you’ve ever received?”

It’s actually from my brother. Somewhere in 2017, I was quite a teen, by teen, I meant labile. I often complain about my life, most of the time I’d like to blame the circumstances.

And my brother told me off by saying this, not exactly like this but more or less he said this,

“So what the hell do you want actually? You know it’s actually okay for you to lead a simple life as long as you are happy. It’s okay to be not good at anything, or have no an outstanding experience, or even possess a high dream, as long as it is what you really want which can make you happy”.

“But for me, I can’t live a simple life. I want something more, and I try to achieve that.”

It’s actually very general advice ya. But It made me think.

I felt that I complained a lot it’s because I didn’t really know what I wanted, and “Complaining” is just a form of justification I did for others, so others will know that I am nothing because of my circumstances not because of my lack of ability or my lack of will.

Again, I thought deeply. If I set something for myself, then It is up to me to judge where I’m now in the process to achieve that. If I’m still lacking, then I’ll strive to work more. It’s way more manageable because I only have to deal with one person’s opinion, which is myself.

← What Do You Want?
Pengalaman Belajar Bahasa Inggris → 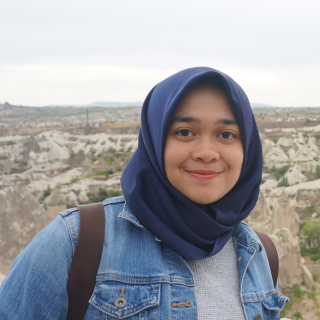 I'm currently living in Indonesia. I like to build stuffs, like software, foods, crafts, painting, and more to come. I also enjoy writing about society, history, movies, and mostly a story of life.